Recent research carried out at Harper Adams University College, in the United Kingdom, investigated the effect of early weaning calf feed pellet size on the performance of artificially reared bull calves. Increasing pellet size from a 3 or 4 mm pellet to a 6 or 8mm pellet may have advantages for feed manufacturers where die changes are required to manufacturer the smaller calf feed pellets.

Using 40 bull calves, the researchers (Marsh and Lingham, 2011) compared daily live weight gain, feed intake and live weight at 12 weeks when calves were fed either a 3mm or 6mm pellet. Calves were housed individually on straw and were offered ad lib water and straw. Initially, calves were fed 4l of milk replacer per day mixed at 125g of powder per litre. Milk replacer was increased to 5l at 8 days. Calves were gradually weaned at 42 days of age and moved into group pens. From 8 days of age, identical diets with a crude protein of 204g/kg DM were offered ad lib as either a 3mm or 6mm pellet.

Overall performance was good, (as shown in Table 1) with calves fed the 3mm pellet attaining a weight of 110.9kg at 12 weeks.

Calves on the 6mm pellet reached a weight of 117.4kg at 12 weeks, exceeding the UK Meat and Livestock target of 115kg for rearing calves to 12 weeks of age. 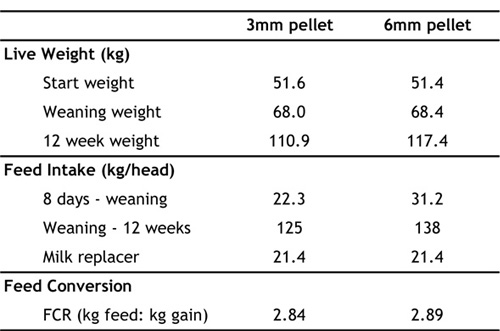 The higher live weight at 12 weeks reported for calves fed the 6mm pellet was a consequence of the significantly higher weight gain in these calves from weaning to 12 weeks (Figure 2).

It is generally accepted that early intake of concentrate feed is a key factor in encouraging rumen development and the authors suggested that improved intake on a 6mm pellet compared to a 3mm pellet would minimise growth checks at weaning and enhance rumen development. 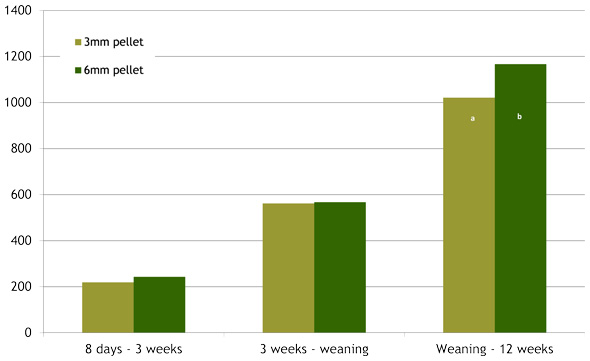 Figure 2: Effect of pellet size on average daily gain in calves (from Marsh and Lingham, 2011).

As calves are typically weaned when they are consuming 1kg of hard feed per day, increasing feed intake preweaning could help to reduce age at weaning and overall rearing costs. In this trial calves were weaned gradually at 42 days and consequently milk replacer cost per calf were the same. However, if earlier weaning were possible, this would reduce the amount of milk or milk replacer fed and could lead to cost savings.