How Important is Crude Protein in Layer Feed?

What is crude protein

The term “crude protein” is really important to understand before one gets into the merits of its levels in poultry feed, or any feed for that matter. Normal, (wet chemistry) analysis of feed measures the nitrogen content of the feed and then, based on protein containing “on average” 16 % nitrogen, the value analysed is multiplied by 6.25 to arrive at a crude protein value. The assumption that all crude protein contains 16% nitrogen and that all the nitrogen found in feed, or feed ingredients, is actually protein really does result in a crude measure of the true protein in feed and hence the term used to describe it. However, crude protein still has its value as a quick and relatively cheap measure to assess whether theoretical feed formulation and actual feed analysis are comparable.

All of the 22 amino acids are used to make up the protein used to produce an egg (or muscle, feathers and skin) but the animal is unable to produce the 10 that are deemed essential through normal metabolism and therefore these must be supplied in sufficient amounts in the diet.

There are many ways to manipulate the crude protein of a feed or feed ingredient using a non protein nitrogen source such as urea or melamine and although this “adulteration” still occurs, it is less frequently found than in previous years due to improved analytical methods available.

Excellent recent research published by Pérez-Bonilla et al. (2012) on brown egg laying hens from 22 to 50 weeks of age concluded that irrespective of initial body weight of laying hens, the crude protein requirement for maximum egg production did not need to exceed 16.5%. However, these authors emphasise that this is only possible if the diet meets the requirements for key indispensable amino acids.

Diets were fed to either low body weight (1 592g) or high body weight (1 860g) hens for the duration of the trial over 28 weeks. The key point is that the 8 critical essential amino acids in all feeds met the digestible levels as recommended by the brown-egg layer supplier.

The lighter birds gained body weight quicker than the heavier birds and their feed conversion per dozen eggs was significantly better (1.52 vs. 1.57). None of the egg quality variables measured was affected by dietary treatment.

Earlier work by Burley et al. (2009) found similar results when they fed diets that contained the same amino acid balance but differed in dietary crude protein by 0.75 and 1.5% respectively. 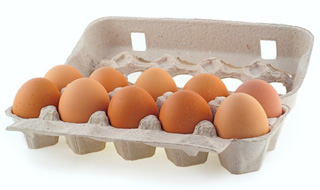 The use of appropriate amino acid ratios (such as those published by Evonik) combined with formulating on the basis of digestible amino acids can help to reduce the overall cost of poultry diets by making the best possible use of the protein component of the diet.

Although it is possible to reduce dietary crude protein levels for layers, there are obviously biological limits to the amount of dietary protein that can be replaced with synthetic amino acids. There is a “tipping” point at which the levels of non-essential amino acids are too low to support maximum egg production and both egg weight and egg numbers will decline.

Talk to us if you have any questions or if you would like to investigate opportunities to reduce the cost of your feeds, while still maintaining performance.

“Crude protein requirement for maximum egg production does not need to exceed 16.5% if all essential amino acid requirements are met.”