The OIE (2005a) define poultry as “all birds reared or kept in captivity for the production of meat or eggs for consumption, for the production of other commercial products, for restocking supplies of game, or for breeding these categories of birds”. It is obvious from this definition that there is a wide variety of potential poultry production types and systems and the New Zealand industry is no different. However, although the current Terrestrial Health Code (OIE, 2005) definition of poultry includes ostriches and emus, as well as game birds in the definition of commercial poultry, this paper looks solely at the commercial poultry production types represented by the Poultry Industry Association of New Zealand (PIANZ) and the Egg Producers Federation of New Zealand (EPF). 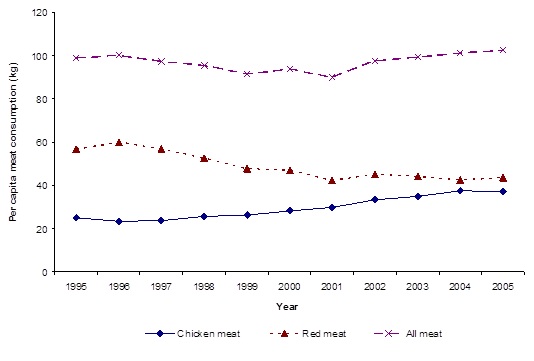 Figure 1: Per capita meat consumption in New Zealand since 1995 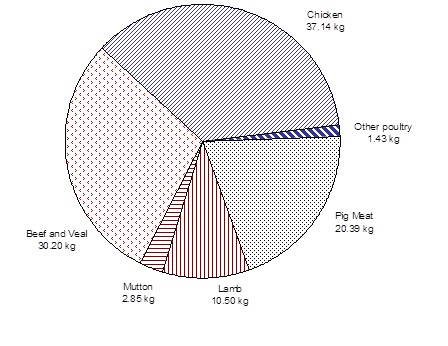 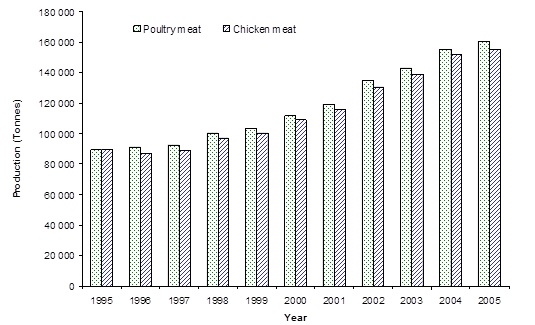 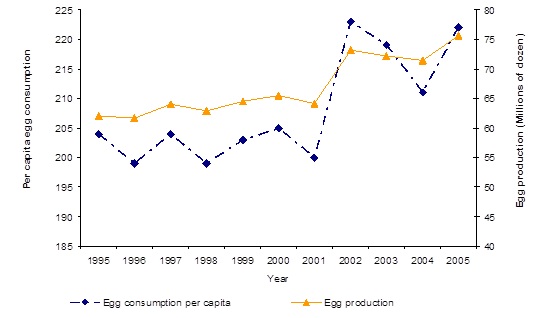 Figure 4: Egg consumption per capita and egg production in New Zealand since 1995

On farm biosecurity and poultry health in New Zealand

The absence of these three diseases, and in particular the absence of IBD, has many benefits to the New Zealand poultry. For example, vaccination against IBD, in most countries around the world and NCD in many countries is routine. This in itself adds to production costs. However, even if vaccination is successful in preventing a disease outbreak, for any vaccination programme to be successful, some level of immune response is required and the animal will inevitably incur some physiological cost in initiating the response. Deitemeyer (2005) noted that “immunological stressors can excessively activate the immune response, trigger abrupt changes in the pro-inflammatory immune response, cause a loss of appetite and repartition nutrients away from homeostasis and production (such as muscle formation) in order to support the immune response”. While the physiological cost of a vaccine response is likely to be considerably less that required in a disease response there is, never the less, a cost incurred. Unlike broiler chickens produced in any other country in the world, New Zealand broiler chickens are not vaccinated at any stage in the production cycle. In contrast, some vaccination of layer hens against salmonella, Marek’s disease, fowl pox, infectious laryngotracheitis, infectious bronchitis, Mycoplasma gallisepticum, avian encephalomyelitis and egg drop syndrome (Marks, personal communication) is practised, although the New Zealand vaccination programme is far less intense than that required in other countries. Similarly, relatively little vaccination of broiler breeders is practised in New Zealand (Marks, personal communication).

The New Zealand broiler industry is internationally renowned for the high biological performance achieved across the industry, with average live weight gains and feed conversion ratios achieved on New Zealand broiler farms often better than the expected breed standard. This is illustrated in Figures 5 and 6. This improved performance is attributable to a combination of factors including high levels of animal husbandry and on-farm management, good climatic conditions for broiler production and, in particular, high levels of on-farm biosecurity and freedom from disease. 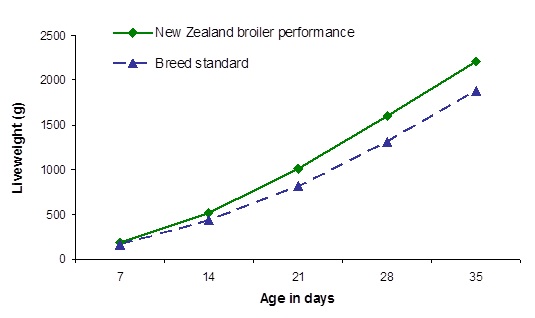 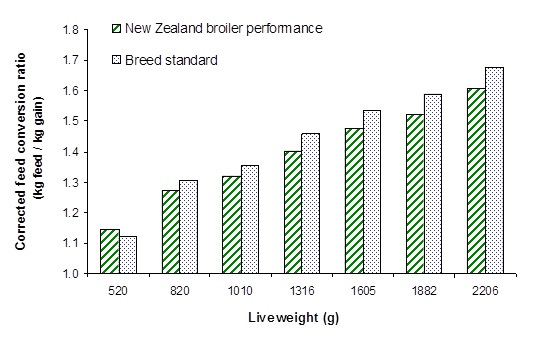 Freedom from IBD has another significant positive effect on the New Zealand poultry industry, allowing New Zealand breeding companies to export IBD virus sero-negative breeding stock to Asia and the south Pacific. Breeding stock exporters can therefore offer international customers the added value of high health genetics and simplified vaccination control programmes compared to those required for sero-positive flocks, which no other country can offer (Deitemeyer, personal communication). The increasing threat of H5N1 in Asia and parts of Europe and Africa, combined with New Zealand’s unique biosecurity status, may in future impact significantly on the role that New Zealand can play in the international supply of disease-free poultry breeding stock, with potential markets further abroad than simply Asia and the South Pacific.

It is clear, therefore, that freedom from the major poultry diseases has a significant cost benefit to New Zealand poultry and egg producers. The high degree of vertical integration in the broiler industry, combined with good technical support from poultry breeding companies and a high degree of producer education means that producers are acutely aware of the importance of on-farm biosecurity and continue to work hard to maintain traditionally high on-farm biosecurity levels.

HPNAI viruses are defined as influenza A viruses that have an intravenous pathogenicity index (IVPI) of greater than 1.2 in 6 week old chickens, or which cause at least 75 % mortality in 4 to 8 week old chickens infected intravenously. Viral isolates of subtype H5 or H7 which do not have an IVPI greater than 1.2 or cause 75 % mortality in intravenous lethality tests, but which are found, on sequencing of the cleavage site of their haemagglutinin molecule, to possess an amino acid motif similar to that observed for other HPNAI isolates are also considered HPNAI (OIE, 2005c).

New Zealand is currently free of HPNAI (OIE, 2005d) and no cases of HPNAI have ever been reported in New Zealand (OIE, 2005d). Current passive surveillance measures, including routine monitoring of both broiler and layer flock mortalities, as well as feed and water intake on farm and reporting of mass poultry or bird deaths to the MAF 0800 hotline amongst others (Geale and Rawdon, 2005), are in place and allow for rapid detection of HPNAI in the commercial and backyard poultry industry.

Surveillance of wild bird populations for AI viruses is conducted by MAF (Cork, 2005; Geale, 2004). Black et al. (2004) conducted a survey of pigeons from Auckland, Christchurch, Wellington and Dunedin and reported no evidence of AI viruses in all sera tested using the agar gel immunodiffusion test (AGID). Similarly, no avian influenza viruses have been identified during extensive surveillance of migratory shorebirds, including godwits, knots and wrybills, carried out by MAF over the last two years (MAF, 2005a).

In contrast, surveillance of wild waterfowl has resulted in the isolation of a number of AI viruses since 1984 (Tana et al., 2005; Rawdon and Geale, 2005). All viruses have been isolated from clinically healthy mallard ducks and all have been low pathogenic viruses. Three of the viruses isolated were identified as LPNAI, two H5 isolates in 1997 and one H7 isolate in 2005 (Stanislawek, 2005, cited by Tana et al., 2005). As all AI virus isolations have been from wild waterfowl, New Zealand’s NAI freedom status is not affected (Tana et al., 2005).

The risk to New Zealand of AI

A review of the current H5N1 epidemic affecting Asia and parts of Europe and Africa clearly illustrates the role of migratory birds and uncontrolled movement of poultry and associated fomites in the spread of this highly contagious disease. However, New Zealand’s island status plays a key role in minimising the risk of HPAI entering the country.

Banding studies carried out in New Zealand have shown that although wild ducks may disperse widely throughout the country, they are not migratory (Heather and Robertson 1996, cited by Pharo et al., 2000). Similarly, there is no evidence that Palaeartic ducks reach New Zealand (Marchant and Higgins, 1990, cited by Pharo et al., 2000). Consequently, the risk to New Zealand from wild waterfowl (particularly those of the order Anseriformes) which appear to be the natural reservoirs and maintenance hosts of AI viruses (Morris and Benard, 2004) is low. Swayne and Halvorson (2003) further suggested that Charadriiformes (shorebirds, gulls, terns and auks) may also act as reservoirs of AI viruses. Species of this order which are the most common migrants to New Zealand include the bar-tailed godwit (Limosa lapponica) and lesser knot (Calidris canutus) (Geale and Rawdon, 2005; Pharo, 2000). However, in recent years, extensive surveillance testing has been carried out on migratory species and as detailed above no AI viruses have been identified.

Both PIANZ and the EPF have been working closely with MAF to ensure that appropriate plans are in place should an outbreak of NAI ever occur in New Zealand. To date, planning has included the development of comprehensive technical response policies and plans for a notifiable avian influenza outbreak (Rawdon and Geale, 2005), investigation of a number of alternative methods of carcass disposal (Koppel et al., 2006; Thomas, 2005) and establishment of Technical and Stakeholders advisory groups.

Prompt reporting of any suspect exotic disease outbreak is fundamental in ensuring the rapid initiation of a response, and essential if the disease in question is to be effectively controlled and eradicated and the disease-free status of the country, zone or compartment re-established. However, prompt reporting is only likely to occur if affected farmers

An integral part of response planning is to ensure that producer concerns are addressed and that producers have an understanding of the processes followed in a response. A series of Poultry Industry Updates on Avian Influenza (PIANZ / EPF, 2005a; PIANZ / EPF, 2005b; PIANZ / EPF, 2006) have been distributed to PIANZ and EPF members, as well as other stakeholders, with the intention of providing producers with a clearer understanding of avian influenza as a whole, the current H5N1 outbreak, procedures followed in a HPNAI response and references to accurate sources of information on avian influenza. Laminated posters detailing the symptoms of avian influenza in poultry have also been distributed to members and other bodies by PIANZ and the EPF.

Statements issued in recent months by The Food and Agriculture Organisation (FAO), the World Health Organisation (WHO) and the European Food Safety Authority have all confirmed that avian influenza cannot be transmitted to humans by eating properly cooked poultry meat or eggs (WHO/FAO, 2005; EFSA Scientific Panel on Biological Hazards, 2006; Lee, 2006). However, considerable media attention has been focused on the current H5N1 outbreak and the human fatalities associated with it. Regardless of whether it is accurate or not, public perception plays a significant role in determining how consumers respond to any reports of positive avian influenza test results. This is clearly evidenced in the report of the FAO (2006), which stated that the response of European consumers to H5N1 avian influenza being found in wild bird flocks had been variable. Italy experienced a dramatic 70 % decrease in consumption in mid-February, while France and Northern Europe experienced decreases in consumption of 20 % and 10 % respectively. A recent report by IGD (2006) showed that 82 % of 1000 British shoppers surveyed in January 2006 had not bought more or less British poultry after considering the issue of bird flu. 12 % of shoppers had bought less poultry, while 6 % had increased their purchases. However, in contrast to this, Awbi (2006) stated that an ITN news poll of 2000 viewers on the 7th of April, the day after a dead swan tested positive for H5N1 in Scotland, found that 49 % of those surveyed may consider cutting poultry from their diets, with 23 % saying they will stop eating eggs and chicken.

Therefore, a major concern for all industry members is the potential impact of consumer concerns or perceptions on the consumption of poultry products within New Zealand. To address these issues, both PIANZ and the EPF have worked closely with member companies and MAF to ensure that the New Zealand media have ready access to accurate information on avian influenza, both in general and regarding how New Zealand consumers are affected. Industry websites, representation at trade shows and continual contact with producer members have also been used as means of communicating accurate information about avian influenza and the New Zealand poultry industry to consumers.

In addition, the poultry industry has, for a number of years, been a member of the New Zealand Food Safe Partnership, an organisation which brings together representatives from the food industry, consumer groups, public health groups, the New Zealand Food Safety Authority and the Ministry of Health to promote consistent and appropriate food safety messages to New Zealand consumers. The poultry industry, together with the Food Safe Partnership, continues to advocate the long-standing advice that poultry and eggs should be cooked thoroughly to enhance food safety.

While the poultry industry is obviously concerned about the potential for any exotic disease outbreak within the industry, and has taken this opportunity to refocus attention on issues surrounding biosecurity, significant changes in attitudes towards on-farm biosecurity have not been necessary. The poultry industry has welcomed the opportunity to work closely with MAF and Biosecurity New Zealand in preparing response plans and ensuring that all levels of the New Zealand poultry industry can play a comprehensive and responsible role in any disease response.