Is Meat and Bone Meal Essential for Poultry Diets?

The traditional availability and relatively low cost of meat and bone meal (MBM) in New Zealand means that it has been and is commonly included in diets for both laying hens and meat producing birds. Moreover, there is a feeling that MBM is an essential component of a poultry diet. But is this really the case, or is MBM an ingredient we’ve simply come to expect in our poultry diets?

The cost of MBM relative to soya has increased considerably in recent times (shown in Figure 1) where the actual cost of MBM is compared to that of soya purchased by one feed mill. 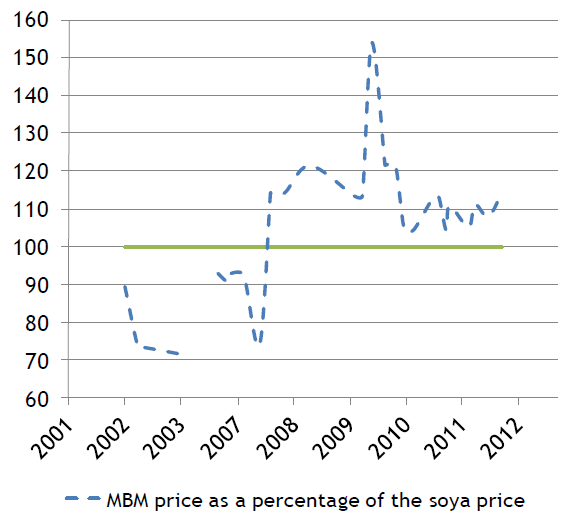 In many countries around the world, the use of MBM or other processed animal proteins (PAP) is either prevented by legislation or restricted by lack of availability. While many farmers in the EU reported seeing a variety of production issues in their flocks soon after the ban on PAP, these issues have largely disappeared in recent times. In countries such as the USA, Canada and South Africa, where meat and bone meal is largely unavailable and has been for many years, corn or wheat and soya based diets give excellent performance in both broilers and layers.

The biggest contribution MBM makes to a poultry diet is arguably as a source of protein and in particular essential amino acids. However, the protein (and amino acid) content varies according to the season and the quality (or digestibility) according to the level of processing.

Despite the fact that many plant proteins available in New Zealand (e.g. soya and peas) are low in methionine levels, the plant proteins tend to be a lot more consistent both in terms of amino acid quantity and quality. The ready availability and relatively low cost of synthetic amino acids makes it much easier for the modern nutritionist to balance a plant protein based diet to ensure optimum and cost effective bird performance

One of the down sides of soya as the principal proteins source in a poultry diet is the high potassium content, which can lead to wet litter.  However, potassium levels in typical MBM free diets for laying hens in New Zealand don’t usually pose a problem.

The calcium and phosphorus content of poultry diets is particularly important, with MBM an excellent source of these minerals. In fact, high phosphorus levels sometimes found in MBM can even be detrimental and can sometimes limit inclusion levels. In such cases, if usage levels are not restricted and a diet with high levels of available phosphorus is fed to birds there is a negative effect on calcium uptake, frequently observed as rickets in young birds or soft shelled eggs in layers.

Most plant materials used in animal feeds contain phosphorus, although much of this is in a form which is unavailable to monogastric animals. Maize and soya, for example, contain about 2.6 and 6.2g/kg of phosphorus respectively.

However, 75% of the phosphorus in maize and 60% of that in soya in in the form of phytate, which monogastric animals do not have the enzymes to digest. Australasian researchers have estimated that the average poultry diet contains approximately 10g/kg of phytate bound phosphorus. According to Selle and Ravindran (2007) a good quality phytase enzyme will release about 1g of phosphorus per kilogram of feed in the average poultry diet. Over a tonne of feed, this equates to the same amount of phosphorus as that provided by approximately 22kg of a typical NZ MBM.

Although the levels of Salmonella in NZ poultry and eggs is very low by world standards, and there is always the possibility of salmonella contamination from other raw materials, MBM is generally considered a high risk raw material and risk management strategies for salmonella control are recommended.

Formulating poultry diets using available rather than total amino acid levels, balancing the amino acid profile of the diet using synthetic amino acids and using a phytase enzyme which increases the availability of phosphorus from plant material are two strategies which have been successfully employed to ensure optimum bird performance in the absence of MBM in poultry diets.

The strategies which have been described above have additional benefits for producers in that they typically improve productivity and feed efficiency, largely by matching the requirements of the birds more closely with the supply of nutrients from the feed.  In addition to the improvements in performance and the subsequently increase in income, total feed costs can often be reduced and overall profitability increased.

In recent years, the demand for MBM from South East Asia has driven the price of locally available MBM upwards.  As a result the difference in price between MBM and other protein sources has shrunk. This makes it increasingly worthwhile for producers to regularly evaluate the value of MBM in their diets in comparison to other raw materials.

Talk to us about how you can do this.

“It is estimated that phytase enzymes can release the same amount of previously unavailable phosphorus from plant material as found in 22kg of a typical NZ meat and bone meal or 5kg of   dicalcium phosphate.”