Physical Processing of Feed in the Avian Gizzard Implications for Whole Grain use in Layer Feeds.

In avian species, the gizzard plays an important role in reducing the size of ingested feed particles and it is generally accepted that larger particles are retained in the gizzard until such time as they have been sufficiently reduced in size to leave the gizzard. However, despite the fact that the gizzard has the ability to grind feed to a very consistent particle size range regardless of the original particle size of the feed, research has also shown that larger particles do occasionally pass out of the gizzard. This, according to Professor Roger Lentle of Massey University,  suggests that the gizzard does not simply act as a sieve but rather that selective retention of larger feed particles depends on a probabilistic sorting action generated during a specific contractile sequence of the gizzard.

Until recently, the sequence of contractions occurring spontaneously in the gizzard have not been well described, but world leading research carried out at Massey University and explained by Professor Lentle at the recent Massey Technical Update has clearly shown the sequence  of contractions in the avian gizzard.

Essentially, the front and back parts of the gizzard are surrounded by thin muscles with little residual muscle tone, while the central lumen is surrounded by a thick muscle (the crassus) with significant tone.

Professor Lentle and his team hope that the work they have done so far will contribute to a better understanding of the effect of the physical characteristics of feed and gizzard stones on gizzard transit and reduction in particle size and subsequently feed efficiency.

In an attempt to improve gut health in meat birds, where diets contain small grains (such as wheat, barley or sorghum) it has become relatively common to include some whole grain in the diet. Typically the inclusion of whole grain in broiler diets leads to an increase in gizzard size and frequently an improvement in performance.

There is less data available on the effects of whole grain on gizzard development of laying hens, but the effect of whole grain appears to be less dramatic than that observed in broilers. This is possibly a result of the lower feed intake of or higher levels of granular limestone in diets for layers.

Fine grinding of grains for inclusion in poultry feeds represents a significant cost in terms of energy consumption and consequently opportunity exists to reduce total diet costs if a coarse grind or some whole grain can be used.

In addition increasing particle size of the ground grain will help reduce dustiness of the feed and also improves flowability in silos. A potential disadvantage of using more coarsely ground grain is the risk of separation although it is likely that this would be outweighed by the benefits of a coarser grind.

The inclusion of cracked maize at 100% of the maize component of the diet had no significant effect on egg production, egg weight, feed efficiency, egg mass or body weight. However, there was a significant quadratic effect on feed intake with birds on the higher levels of cracked maize eating slightly less feed. This is shown in Figure 1.

Although there was no significant difference in the determined AME values of the feed, there was a tendency for AME to increase as the proportion of cracked grain in the diet increased. This may have been a factor in the slightly reduced feed intake seen in the birds fed the highest level of cracked grain. 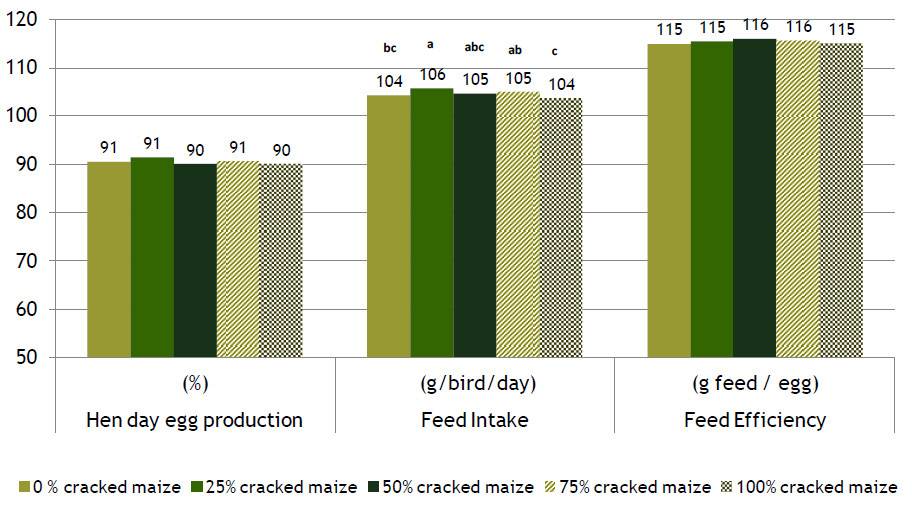 Figure 1: Effect of increasing the proportion of cracked maize in diets for laying hens (from Singh et al., 2012).

The optimum feed particle size for laying hens irrespective of the source of grain components is well described by ISA Poultry who advise that at least 75 to 80% of the feed particles should be between 0.5 and 3.2mm with no more than 15% below 0.5mm and/or 10% above 3.2mm.  Very fine feed will depress feed intake and reduce egg output (Table 1).

Using coarsely ground grain or some whole grain in your layer diets could help reduce milling costs and may have the added bonus of improving gut health.

Table 1: Influence of feed particle size on performance of laying hens between 23 and 51 weeks of age (from ISA, 1999). 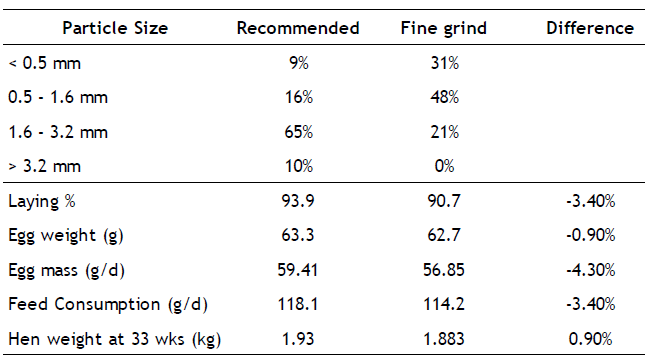 “World leading research carried out at Massey University and explained by Professor Roger Lentle at the recent Massey Technical Update has clearly shown the sequence of contractions in the avian gizzard.”