What are your feeds costing you?

We all know the cost of feed makes up a significant proportion of the total cost of production and it looks as if the costs of feed (or raw materials) is going to remain high for some time to come. In a recent article published in an international pig industry newsletter well know pig expert Dr. Ioannis Mavromichalis pointed out that for such an expensive decision, one can never be too vigilant, noting that even a 5% reduction in feeding cost can make the difference between breaking even or breaking the bank!

While the article was intended for pig producers, the concepts apply equally to the poultry (meat and egg), dairy and animal feed manufacturing industries.

Although there are a number of factors driving the volatility in commodity prices, suffice to say the situation is unlikely to change in the foreseeable future.

As feed is such a large proportion of the cost in most animal production systems, it is one of the first areas where we focus our attention when looking to reduce costs. Unfortunately, while keeping input costs low is always an important consideration, reducing feed costs does not always result in greater profitability.

For example, when feed cost is reduced through purchasing a cheaper (usually lower specification) feed for laying hens, the result is often an increase in feed intake, possibly to the point where the cost of feeding also increases. But there are some simple tools and strategies which livestock producers and feed manufactures should be investigating, along with their nutritionist, to make sure that they are getting the best value for their money.

We recently examined the savings that could be achieved simply by reformulating a layer feed every second month to take account of changes in the raw materials cost.

Although many small and medium sized producers would have a fixed price for grain through most of the year, prices of other feed ingredients, including meat and bone meal, amino acids and oil can vary considerably as can the price of any additional grain purchased during the year.

For this analysis, we used raw material prices published in Pork Outlook since February 2008. Although these may not necessarily reflect prices paid by individual producers they do reflect the trend in price seen in the industry over a number of years. Diets were formulated to meet the minimum nutrient specifications of a typical post peak layer diet.

For the purposes of the exercise, the minimum specifications of the feed were kept constant – so feed intake and production is unlikely to be affected. Similarly, it was assumed that the nutrient composition of the raw materials remained constant. We know that this is not always the case and that certain raw materials vary more than others. We will investigate the effect of this variation in a later edition of Out of the Bag. 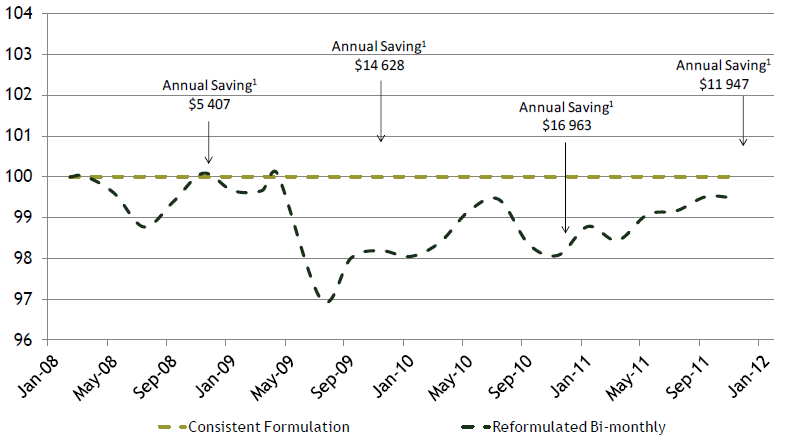 Figure 2: Relative cost of a layer feed reformulated every second month compared to a reference diet.

For an egg producer with 60 000 birds eating 110g of  post peak feed per day (or a total of 50t per month), the potential cost saving of reformulating diets every two months varied from just over $5 000 per annum to just under $17 000 per annum.

Give us a call at Complete Feed Solutions if you would like to discuss how regular reformulation of your feeds could work for you.

“The potential cost saving from reformulating diets to take account of raw material price changes varied from just over $5 000 per annum to just under $17 000 per annum based on 50t of feed per week.”